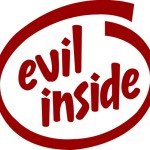 A call for papers for something called the Evil Incarnate Conference  came through my email today. The theme is “Manifestations of Villains and Villainy,” and the conference seeks a definition through exploring various cultural representations of evil.

This was a fascinating coincidence, since we’re currently exploring something similar in the True Crime class. Our perspective is more literary/historical and not so much philosophical, and crime and villainy aren’t always the same thing, but it could be an opportunity to build on the work of the semester. Another nice little coincidence is that the conference will be held in Cleveland, home of the Torso murders. And the Rock and Roll Hall of Fame, which I think my wife wants to visit.

The Cleveland/Torso connection makes a nice case study. It gives us a clear hero and villain: Eliot Ness, the man who cleaned up Chicago, and the mysterious serial killer, who murders indigents allegedly in the name of scientific progress. At the same time that was going on in Cleveland, we had a government funded experiment doing much the same thing at the Tuskegee Institute. One was considered a heinous crime and the other was not, at least not until it became public some 40 years later. The hero’s ultimate response to the crimes was to burn the residents of the shantytown out of house and home. While that may have been less villainous than killing and dismembering them, it hardly seems heroic.

We’ve seen changes in representations of crime over the course of history. Some of the early execution sermons displayed criminals as lessons in the power of God’s saving grace. In today’s America, those same women would be reviled as monsters for killing their own children. Yet we also have a park named after a man who led a killing spree in the 1830s. And as we look at our last two works, Martin Scorsese’s Goodfellas and Monster by Sanyika Shakur, we will be seeing criminals who are viewed as heroes in their respective ‘hoods.

Could I tie together what we’ve been doing and turn it into a paper? I think I’d be out of my depth, because it’s hardly my area of research, but I also think it might be fun. Then I wonder if I don’t have enough to do already.